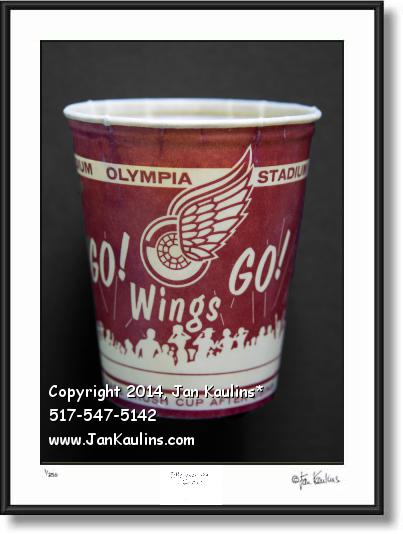 
OLYMPIA STADIUM CUP DETROIT photo picture art print photography for sale. This artistic studio portrait is a multiple exposure image of a very rare DETROIT RED WINGS OLYMPIA STADIUM paper cup from around the 1950's and 1960's from the old Original Detroit Olympia Stadium, home of The Detroit Red Wings since 1927. This waxed oversize paper beer cup is quite rare in that most of these were of course thrown away at the hockey games and rarely kept. This is a great image of one of these rare OLYMPIA STADIUM DETROIT paper cups as interpreted by artist/photographer Jan Kaulins as part of his Detroit Icons series.

This is an original MULTIPLE EXPOSURE High Dynamic Range (HDR) color photograph created by nationally recognized artist/photographer Jan Kaulins. It is one of the newest artistic images in his most recent series of photographs. Each photograph has been created from nine separate photographic digital exposures and then layered together into one photographic image. It is then tone-mapped where individual areas of the photo, as well as contrast, saturation and other qualities of the image can be artistically manipulated to bring out the artistic effects that make these photos so visually unique. Some of the photos in this series are even further enhanced for artistic effect giving them an almost painterly or graphic silkscreened look. They do not look like your grandmothers traditional photos. These photos are however not hand-colored, like Jans other photographic series shown on this website.