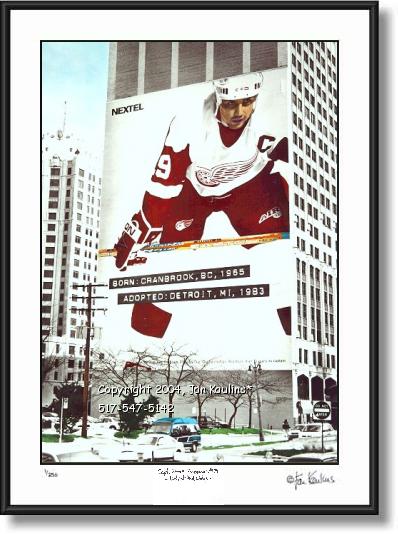 This rare very Limited Edition fine-art photo of The Capt. Steve Yzerman Detroit Red Wings mural, painted by two artists from Portland, Oregon under sponsorship by Nextel, would make a great addition to any Detroit Red Wings memorabilia collection. This 100 foot by 170 foot 18 story tall Capt. Steve Yzerman mural was painted over with white paint on April 12, 2005 and is now gone, making this a very historical and rare Detroit Red Wings collectible. On July 3rd, 2006 Steve Yzerman announced his retirement from The Detroit Red Wings. His legacy will go down in sports history as Yzerman being one of the all time 'greats' of hockey. This fine-art Steve Yzerman mural hand-colored Limited Edition photo is available only from The Detroit Photo Gallery. These are not mass produced commercial prints. Each photo is individually hand printed signed and numbered by the artist/photographer in his own studio and they are NOT sold in stores commercially. This is a very unqiue and rare 'historic' photo since the giant MURAL WAS REMOVED from the side of The Cadillac Towers Building several years ago and no longer exists except in my original photographs. (THE DETROIT ART PHOTO GALLERY)


TO SEE ALL OF THE MANY OTHER DETROIT LANDMARKS AND SPORTS PHOTOS AVAILABLE FROM THE DETROIT PHOTO GALLERY JUST CLICK ON THE 'HOME-Return To All Galleries' LINK BELOW THIS PARAGRAPH.