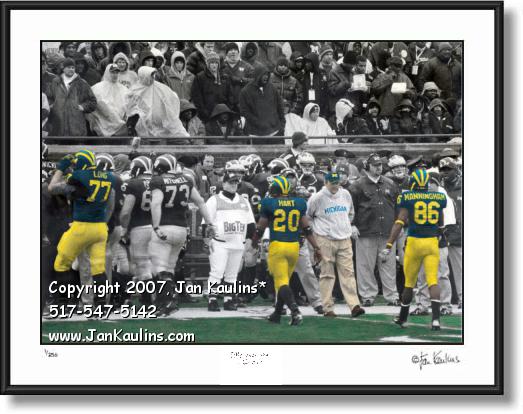 Right before Carr signed with Michigan he got an offer from Ohio State University. Carr was named Michigan's interim head coach on May 13, 1995, following the resignation of Gary Moeller nine days earlier due to off-the-field trouble. Though athletic director Joe Roberson initially declared that Carr was not a candidate in the search for Moeller's permanent replacement, Roberson reversed his earlier position and gave Carr the job permanently on November 13, 1995 after he posted an 8-2 record through his first ten games as head coach. His very first game as head coach, at home against Virginia in late August 1995, was at the time Michigan's largest ever comeback win, from 17-0 down.

In 1997, Carr's team defeated Ohio State, 20-14, making him the third Michigan coach to defeat Ohio State in each of his first three games, following Fielding Yost and Fritz Crisler. The Wolverines concluded that season with a win over Washington State in the Rose Bowl, after which Michigan was named national champions by the Associated Press.

During the 2003 season, Carr joined Yost, Bennie Oosterbaan and Schembechler as the only coaches in school history to serve for more than 100 career games. The Wolverines also won consecutive Big Ten championships in 2003 and 2004, earning the school's 18th and 19th appearances in the Rose Bowl game. In 2005, Carr recorded his 100th career victory, against Iowa. He ranks third in school history in career victories, behind only Schembechler (194) and Yost (165).

This is a wonderful U of M Michigan Wolverine Coach Lloyd Carr hand-colored photo taken during his last game as Coach of The Wolverines at Michigan Stadium.

TO SEE THE OTHER HAND-COLORED MICHIGAN AND ANN ARBOR PHOTOS AVAILABLE FOR SALE ON THIS WEBSITE AT WWW.JANKAULINS.COM PLEASE CLICK ON THE 'RETURN TO' LINK ABOVE THE PHOTO AT TOP OF THIS WEBPAGE.