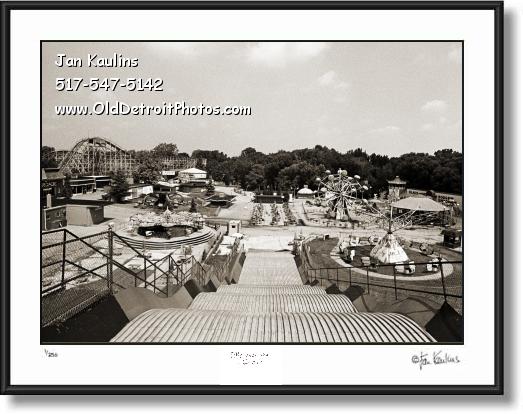 " Detroit Edgewater Park was a 20-acre park at Grand River and Seven Mile Rd on Detroits west side, opened in 1927. It quickly became one of Detroits most popular recreation spots, particularly during the Depression and World War II when it provided an inexpensive way to have fun and forget ones worries for a short while.
The park featured popular attractions such as the wooden roller coaster Wild Beast, a gigantic 110-foot Ferris Wheel and the Hall of Mirrors.
The Park maintained its popularity all throughout the 1950s and 1960s, earning a reputation as one of Detroits greatest hangouts. In September 1981, after years of declining revenues and the growth in popularity of rival theme parks Bob-Lo Island and Cedar Point, Edgewater Park welcomed the last visitor through its turnstiles."

This is a quite rare photographic image of this former Detroit Michigan Landmark EDGEWATER AMUSEMENT PARK.