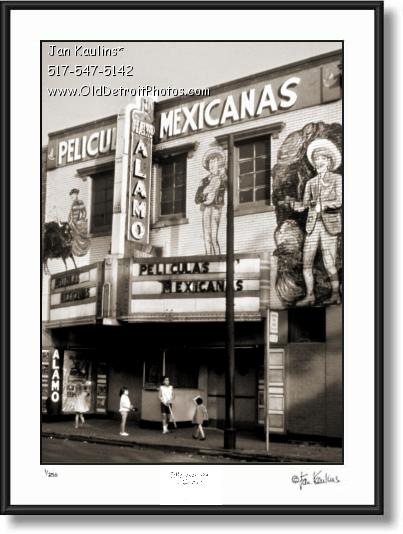 
MEXICANTOWN DETROIT ALAMO TEATRO THEATER photo picture art print for sale. This is an extremely rare historical photo ca. 1960 of the short lived DETROIT MEXICANTOWN ALAMO TEATRO THEATER. This is a previously unpublished photo from a private collection that has never been seen by the public or offered before having been in a private family collection of photos and slides for over 50 years before we recently obtained it. It is a wonderful image of the front of The Alamo Theater in Mexicantown Detroit. At the top of the theater are crudely painted images of a Bull Fighting Matador, a man playing a guitar and at the top right a Bandit with two pistols in his hands. On the sidewalk below are a couple of children playing on the sidewalk. The marquee reads PELICULAS MEXICANAS, which translates to "MEXICAN MOVIES." Through our research we have found almost nothing on the history or exact location of this Mexican Movie Theater in Detroit, aside from knowing that it was in Mexicantown around 1960 or 1961, making this an extremely rare image. The quality of the image from this small amateur photo/negative is quite acceptable and is a wonderful image of this long lost historic local neighborhood theater.