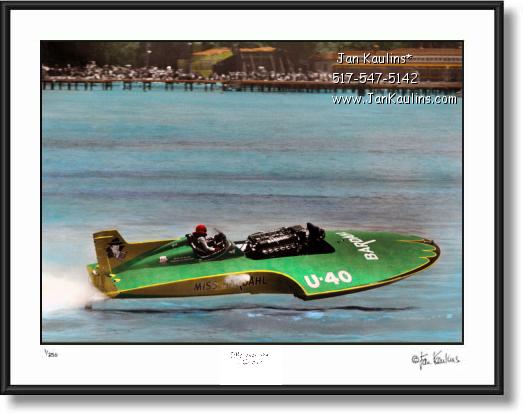 Miss Bardahl won more races (24) in the decade of the sixties than any other team. Between 1957 and 1969, Miss Bardahl accounted for 27 race victories, five Gold Cups, six National Championships, and was the first to average 116 miles per hour in a heat of competition (in 1965). Miss Bardahl is a 30 long, 7000 lb unlimited hydroplane race boat. Powered by a 3,000 HP Rolls-Royce Merlin aircraft engine, this craft is capable of speeds in excess of 180 MPH while literally flying across the surface of the water on a cushion of air. With only three points  1 propeller blade and the two sponsons  touching the water at any time, Miss Bardahl leaves a roostertail of spray over 40 feet high when speeding by. Racing between 1962 and 1965, the team won an unprecedented 3 APBA Gold Cups, 3 National Championships, 1 World Championship, set lap, race and heat records (some which stood almost a decade), and introduced new technology that revolutionized the sport while running a record 57 consecutive heats without an engine failure. THIS HISTORIC MISS BARDAHL 1964 GOLD CUP RACE PHOTO PRINT IS FOR SALE ONLY FROM THE DETROIT PHOTO GALLERY ON THIS WEBSITE. CLICK ON THE LINK BELOW FOR PRICES, SIZES AVAILABLE AND ORDER INFORMATION.