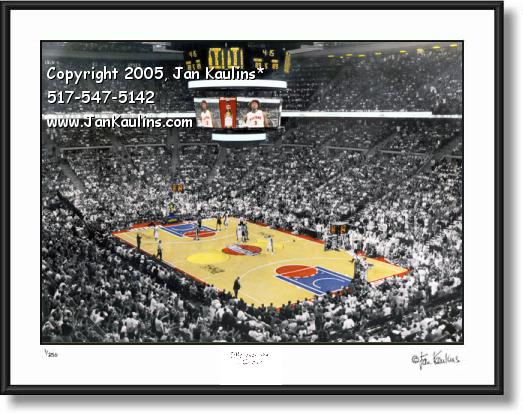 In this exceptional wide angle 2005 Detroit Pistons Finals picture, captured on the big screen, we see a closeup of Detroit Pistons #3 Ben Wallace sporting his trademark Fro. Detroit Piston Ben Wallace has won the NBA Defenseman of The Year Trophy three times, being only the second person in NBA history to do so. In this Detroit Piston NBA Finals photo, Ben Wallace is on the court against The San Antonio Spurs, surrounded by many of his fellow starting Detroit Pistons. The score has just been tied up at 89 to 89 (as can be seen on the screen at top of photo), the entire crowd is on it's feet, and Game 5 of the 2005 NBA Finals has just gone into overtime.

ALSO SEE 'THE SPIRIT OF DETROIT' STATUE WEARING THE DETROIT PISTONS JERSEY on this website and my other original Fine-Art Limited Edition Detroit Pistons photos. Just click on the 'Back to Detroit Pistons...Photo Gallery' link directly above this image. This is an excellent wide angle view of the inside of THE PALACE AT AUBURN HILLS basketball arena. (The Detroit Pistons Photo and Detroit Pistons Art Picture Photo Gallery)