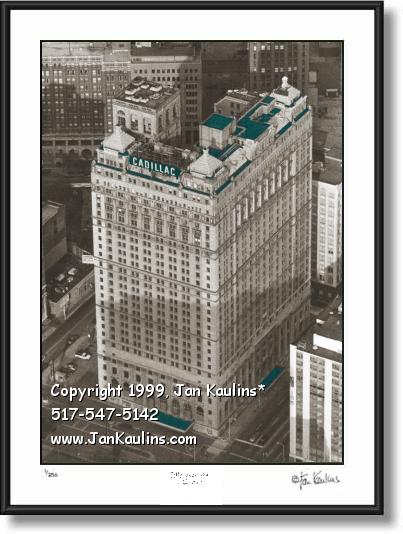 In this downtown Detroit photograph is pictured the historic Book Cadillac Hotel, a Detroit skyscraper hotel that was designed by noted architect Louis Kamper, and is located in downtown Detroit at the corner of Washington and Michigan Ave. In it's day it was one of the grandest of hotel buildings and skyscrapers in the Detroit skyline being 28 stories tall with 1,200 rooms. In fact, when The Book Cadillac Hotel was built, it was not only the tallest building in Detroit, but it was also the tallest hotel in the world! Luminaries such as Presidents Truman, Eisenhower and John F. Kennedy stayed there. It closed it's doors in 1986 but after some false starts it was totally refurbished and opened as a world class hotel once again. This sepia toned Detroit aerial picture photography print of The Book Cadillac Hotel captures the beauty and majesty of this vintage and historic Detroit Michigan landmark building. (DETROIT PHOTOGRAPHY AND DETROIT ART PICTURE PHOTO GALLERY)