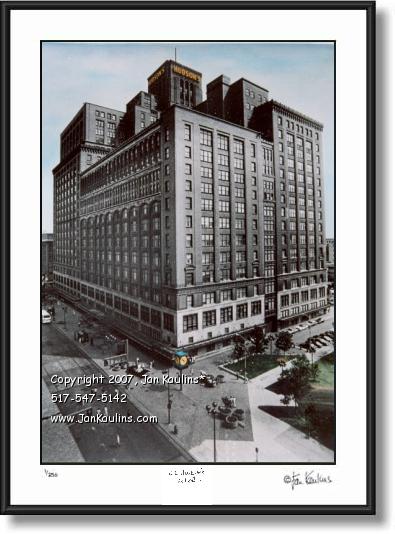 
JL HUDSON'S BUILDING DETROIT picture photo art print for sale. Old J L HUDSON'S Detroit Hudson's Building photo picture print photograph for sale. JL HUDSONS' DEPARTMENT STORE black and white Detroit art print picture photo poster for sale. Vintage historic Detroit JL Hudson's photo photograph pictures prints for sale. This picture of the old Detroit, Michigan downtown J L Hudson's Department Store building was made from an original black and white photograph that was hand-colored. For many years the Kern's Clock (in the foreground in this historical downtown Detroit old Hudson's photo print) stood sentinel at the corner of Woodward and Gratiot as thousands of downtown shoppers and Thanksgiving Day parades marched past it and The J L Hudson's Building. At the top center of The old Hudsons Detroit downtown building we see in giant letters colored in gold the famous HUDSON'S logo--now long gone. note: you may not be able to read the 'Hudson's' logo on this very low resolution web image, but it is very clear and visible on the actual photos that you order. This Detroit landmark picture photograph is of the giant brick Hudson's building which was erected in 1911 and stood a block long on Woodward Ave. After closing it's doors on January 12, 1983 and being abandoned for years, it was imploded in 1998. It was the end of an era for downtown Detroit shoppers. This historic JL Hudson's photo has been hand-colord and printed by artist/photographer Jan Kaulins and is a part of his 'historic Detroit' collection. (THE DETROIT PHOTOGRAPH AND FINE-ART PICTURE GALLERY)