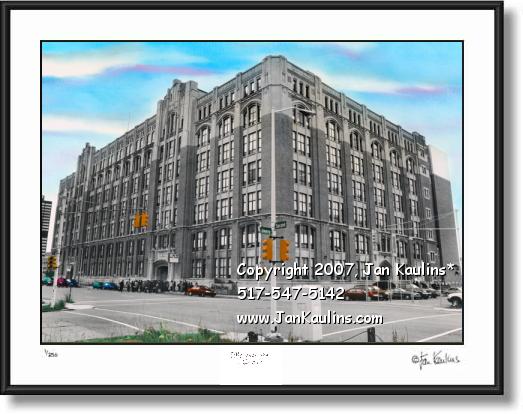 There have been four physical incarnations of Cass Technical High School. The original plot of land bordered by Grand River Road, High Street (Vernor Highway), Second Avenue and Gilman Street, was donated by statesman Lewis Cass some time during the Civil War. At the time it was built, the school was on the outskirts of Detroit and sat opposite of Kings Cattle Yard. The building was expanded from a twelve room building to a twenty-two room building sometime after 1866. In 1909, a fire destroyed the original portion of the building, but spared the addition. In 1912, a new building was completed that encompassed the entire span of the original donated plot, yet, it was still too small to accommodate the large influx of students. Plans immediately went in the place for a newer, bigger building. In 1922, the New Cass Technical High School was completed, dominating the surrounding landscape. It was seven stories tall and half a city block long. An addition was added in 1985, but was left incomplete due to funding issues. (info from Cass Tech 100 year Anniversary site)