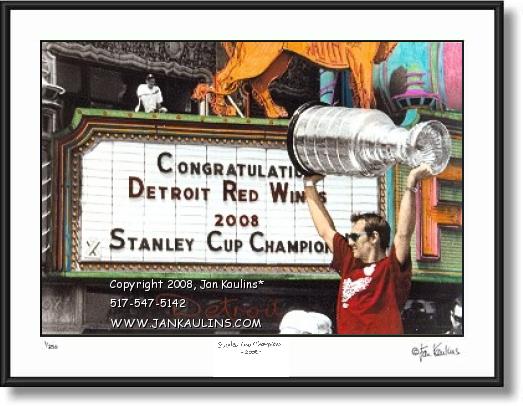 The 2008 Detroit Red Wings Stanley Cup victory parade drew an estimated 1,400,000 people to downtown Detroit to witness this historic celebration. The Red Wings won their eleventh Stanley Cup on June 4, 2008 against the Pittsburgh Penguins in Game Six of the Stanley Cup Finals by a score of 3-2. This was their fourth Stanley Cup in 11 years, between 1997-2008.

This incredible original Detroit Red Wings 2008 Stanley Cup picture photograph artistically captures a monumental moment during that historic event and is only available for sale here from the artist/photographer on this Detroit Photo Gallery website. Please go to the Home Page on this website to see other original photos celebrating The Detroit Red Wings 2008 Champions.