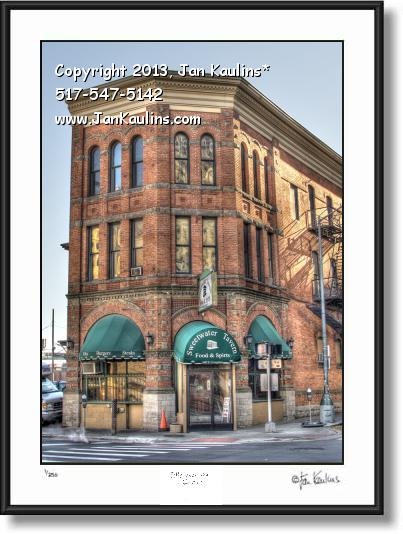 
SWEETWATER TAVERN DETROIT photo art picture print photograph for sale. This SWEETWATER TAVERN photograph picture print for sale was taken as the late afternoon sun was glowing on the ancient bricks of the downtown Detroit landmark restaurant. It is located on East Congress Street in the old historical Detroit district. Among many local favorites on the menu is their most famous---- marinated Chicken Wings---yumm.

This is a relatively new photography technique which uses the blending of the nine multiple bracketed exposures to capture and emulate the way that light levels in the real world vary over an enormous tonal range, from the brightest area of sunlight to the darkest area in the shadows. All of these varying degrees of light cannot be exposed properly and captured in a single photograph---hence the necessity of layering and combining of the multiple over and under exposures to allow the viewer to see all of the existing areas of light at one time in one photo. The enhanced saturation, softness, and color of the multiple images also is a partial result of this very unique photographic process and can be quite stunning and dramatic. Sometimes these artistic Jan Kaulins photos seem to almost blur the sense of reality and illusion.