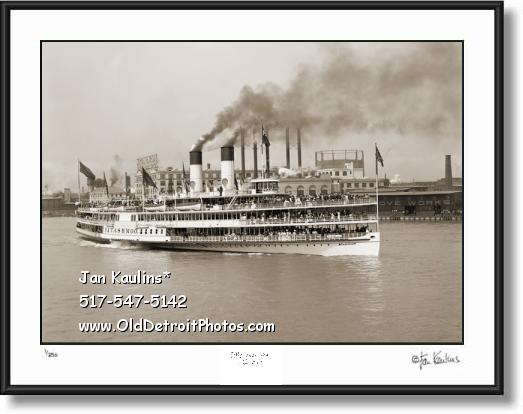 
OLD STEAMER TASHMOO DETROIT RIVER photo print picture for sale. This sepia toned black and white Tashmoo Steamer Str. on The Detroit River photo print picture photograph is made from the restored original 95 year old vintage historic black and white Tashmoo Steamer photo from about 1915. It is a wonderful full length image of The Tashmoo heading out from the Detroit docks. You can see the industrial Detroit shoreline on the Detroit Riverfront in the background. You can easily read the large 'Tashmoo' painted on the side of this historic Great Lakes Steamer.

"The Tashmoo was a sidewheeler steamboat on Lake St. Clair and Lake Huron. It was famous for being one of the fastest ships, at the time, on the Great Lakes. The Tashmoo was the first ship constructed in 1900 and was launched on December 31, 1899. It was built by the Detroit Shipbuilding Company in Wyandotte, Michigan for Detroit's White Star Line. The Tashmoo was nicknamed the "White Flyer" and, because of the number of windows on the ship, the "Glass Hack." The Tashmoo's regular route was from Detroit to Port Huron, Michigan. It made several stops along the way, including at its namesake, Tashmoo Park. On December 8, 1927, the Tashmoo snapped its moorings during a gale and starting drifting up the Detroit River. It collided with a ferry and was found further upstream, stopped by the Belle Isle Bridge. Two tugboats pulled the Tashmoo away from bridge, but the cables broke again and the ship once again headed for the bridge. The ship was 10 yards away from the bridge before the tugboats were able to get the Tashmoo secured again. The ship was eventually repaired.

On June 18, 1936, the Tashmoo struck a submerged rock as it was leaving Sugar Island. The ship was able to dock in Amherstburg, Ontario and be evacuated before it sank in 18 feet of water. It was eventually scrapped. It was entered into the National Maritime Hall of Fame in 1985."