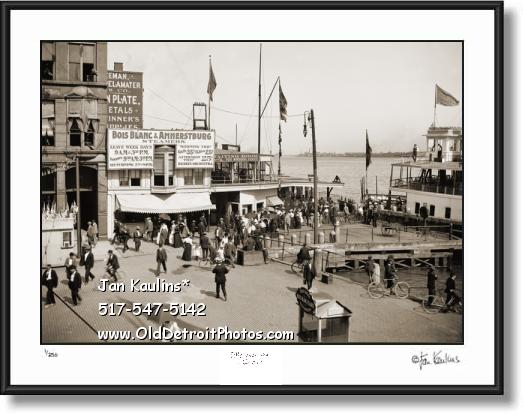 
BOIS BLANC AND AMHERSTBURG FERRY DOCK in Windsor Ontario photo picture print for sale. This is a sepia toned black and white Bob Lo Island (Bob-Lo Island) BOIS BLANC AND AMERHERSTBURG FERRY DOCK photo print made from the restored rare vintage 95 year old original black and white photo negative, circa. 1915. It is a very rare image from this very early period showing the signage for the ticket and excursion booth and also showing the period attire of the gentlemen in their suits and derby hats as well as the well dressed women in the puffy sleeved blouses and floor length skirts. The front of the boat shown in this rare photo is the Detroit River steamer ferry Excelsior as can be sign on the signage at the top of the pilot house on board the ship. The Excelsior was built in 1876 at Detroit. It had a wood hull and was constructed by the Detroit Dry Dock Co. with an overall length of 117 feet. It was used on the route between Detroit and Windsor and also as an excursion boat to Belle Isle Park and Bois Blanc Island. It had a hull of great strenght and was built bluff to contend with the ice on The Detroit River.

" Bois Blanc Island, commonly called Boblo Island, is an island in the Detroit River located directly west of Amherstburg, Ontario in the Detroit River, on the Canadian side of the border. The island is about 2.5 miles long, 0.5 mile wide and 272 acres in size. The main north-bound shipping channel of the Detroit River currently lies between Bois Blanc Island and the Amherstburg mainland. A stone lighthouse built in 1836 on the southern tip of the island marks the historical beginning of the Detroit River navigation channel for ships traveling upriver from Lake Erie. Bois Blanc means "White Woods," a name derived from the many birch and beech trees in the area. "Boblo" is an English corruption of the French pronunciation of the name. Several islands with the same name dot the Great Lakes, and nearly all are known as "Boblo" or "Bob-lo" by the local populations. The island gained strategic importance when Fort Amherstburg (now Fort Malden) was built in 1796 to guard passage along the Detroit River after Detroit was turned over to the Americans. Guns from the fort could reach the island across the navigable waters and hence secured the river. The island has historical footnotes as the site of a French Catholic mission for Wyandot or Huron Indians in the 18th century, as the site of headquarters for the Shawnee chief Tecumseh during the War of 1812, and as an invasion point for 60 Canadian "Patriots" on January 8, 1838 during the Upper Canada Rebellion. " Most recently it was The Bob-Lo Island Amusement Park which has also closed. The boat shown on the right side of this historic photo was The Excelsior.