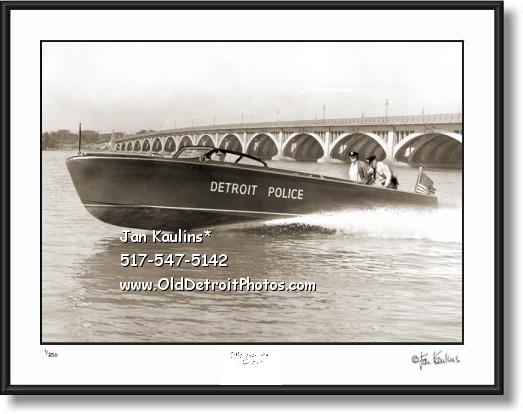 
DETROIT POLICE SPEEDBOAT 1952 photo picture print photograph for sale. DETROIT POLICE SPEEDBOAT vintage old boat photo picture fine-art print for sale. This sepia toned Detroit Police Speedboat photo print is made from an original restored vintage old 1952 Detroit Police Speedboat original negative/photo. It shows the Detroit Police new speedboat having gone under the Belle Isle Bridge in 1952 on its way to be delivered to the Harbormasters crew in Detroit. This is a rare photo of this historic craft on the Detroit River and the Belle Isle Bridge behind it.

"In its heyday, the D&C Line was among the most well-known shipping companies in business on the Great Lakes, with its vessels being among the largest and most palatial ever seen. Two of them, the SS Greater Buffalo and the SS Greater Detroit, were both built in 1923, and, being 7,739 tones and 518 feet long each, were known as the largest side-wheeler passenger ships in the world. Frank E. Kirby was the noteworthy naval architect who designed many of the D&C ships. As ferry and cruise ships, all of the ships of D&C were a success, with various civic groups and companies often chartering each ship on account of their reputations for excellent services and good cuisine. Upon reaching Buffalo, happy honeymoon couples would connect to Niagara Falls. In the late 1930s, the increasing use of the automobile caused passenger numbers to slowly fall.

During World War II, the Greater Buffalo, along with the Cleveland, shown here, and Buffalo Line ship SS Seeandbee, were both converted into training aircraft carriers for use on the Great Lakes. Many of the pilots that were trained on these domestic ships later fought in combat in the Pacific. In the meantime, the Greater Detroit and her fleetmates saw an increase in passenger revenues, with the ships being reasonably full as Americans rationed gasoline for the war effort and therefore chose to travel between cites on the D&C liners, among other lines operating then. "