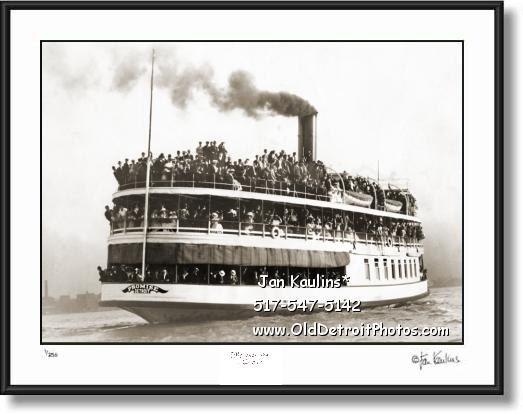 
BOB-LO STEAMSHIP SS PROMISE Detroit steamboat ferry 1912 photo print picture photograph for sale.This sepia toned BOB LO STEAMSHIP SS PROMISE is made from an extremely rare 1912 Steamship SS Promise Original photo of the VERY FIRST Bob-Lo steamer to carry passengers to what is now known as Bob-Lo Island---then it was called BOIS BLANC. THE PRIMROSE WAS THE FIRST DETROIT RIVER FERRY TO CARRY PASSENGERS TO WHAT WE NOW CALL BOB-LO ISLAND. The Bob-Lo boat SS Promise Steamer was built in 1892 after the consolidation of the Windsor Ferry Company and the Detroit Ferry Company in 1877. This company built numerous steamers that carried passengers on the Great Lakes as well as voyages on The Detroit River to Bob-Lo Island and Belle Isle. Two of the better known steamers that this Ferry Company built were The Columbia built in 1902 and The Steamer Ste. Claire built in 1910. This rare photo shows The old Detroit Steamship SS Promise packed with passengers with the name PROMISE boldly visible on the bow.

The Tashmoo took parties to the popular Tashmoo Park in the St. Clair Flats at Harsens Island, about a three-hour cruise from downtown Detroit. In December 1927 severe winter winds blew the Tashmoo loose from its downtown mooring, slamming it against the Belle Isle Bridge.. The ship survived but a few years later in 1936 it began to sink during a Hamtramck Social Club dance cruise on the river and limped to the Canadian shore where it went aground partly submerged. Passengers refused to leave the ship and convinced the orchestra to play on. All had to be coaxed off the vessel.

THESE BLACK AND WHITE DETROIT PHOTO ART PRINTS ARE VERY HIGH QUALITY PROFESSIONALLY RESTORED PRINTS MADE FROM THE ORIGINAL OLD VINTAGE HISTORICAL DETROIT PHOTOGRAPHIC PRINTS OR NEGATIVES. THESE SEPIA TONED DETROIT BLACK AND WHITE PHOTOS ARE OFFERED FOR SALE HERE FOR THE VERY FIRST TIME. THEY HAVE BEEN MADE FROM ORIGINAL NEGATIVES OR ORIGINAL FIRST GENERATION PRINTS, MANY OF THEM ARE 50 YEARS OLD AND SOME DATE TO THE EARLY 1920's AND 1930's. THE RARE OLD DETROIT ORIGINAL PHOTOS AND BLACK AND WHITE NEGATIVES USED FOR THESE PRINTS HAVE BEEN OBTAINED FROM HISTORICAL SOCIETIES, NATIONAL ARCHIVES, THE LIBRARY OF CONGRESS AND NUMEROUS PRIVATE COLLECTIONS. IT HAS TAKEN SEVERAL YEARS TO PUT THESE OFFERINGS TOGETHER ON THIS WEBSITE. MANY OF THESE PHOTOS ORIGINALLY CAME FROM OLD DEFUNCT NEWSPAPER AND MAGAZINE ARCHIVES, WHERE THEY WERE USED ONCE FOR A STORY AND THEN USUALLY JUST THIS ONE ORIGINAL PRINT WAS MADE AND KEPT FOR THEIR ARCHIVES. HENCE, THESE HISTORICAL IMAGES WERE NOT ORIGINALLY MADE TO BE FOR SALE, BUT WERE TO BE USED AS IMAGES FOR NEWS STORIES AS THEY UNFOLDED--MAKING THESE IMAGES EXTREMELY RARE HAVING SURVIVED SO MANY YEARS. VERY FEW OF THESE IMAGES HAVE EVER BEEN OFFERED FOR SALE TO THE PUBLIC UNTIL NOW.

THE ORIGINAL OLD DETROIT BLACK AND WHITE PHOTOGRAPHS HAVE DIGITALLY BEEN RE-MASTERED AND PROFESSIONALLY RESTORED AND ALL MAJOR FLAWS, SUCH AS TEARS, SRACTCHES, MISSING PIECES, FOLDS, INK STAINS ETC. ON THESE RARE PHOTOS HAVE BEEN PAINSTAKINGLY REMOVED AND CORRECTED AND HIGH QUALITY PRINTS OF THESE HISTORIC RARE DETROIT BLACK AND WHITE SEPIA TONED PHOTOS ARE NOW OFFERED, FOR THE FIRST TIME, ON THIS WEBSITE WWW.OldDetroitPhotos.COM . THESE PHOTOS HAVE BEEN BEAUTIFUL RESTORED AND ARTISTICALLY SEPIA TONED AND OFFERED IN A LIMITED EDITION OF INDIVIDUALLY PRINTED PHOTO PRINTS. THEY ARE READY FOR DISPLAY IN YOUR HOME OR OFFICE. HERE IS YOUR CHANCE TO OWN AND ENJOY SOME VERY SPECIAL AND UNIQUE DETROIT PHOTOGRAPHIC HISTORY. BobLo