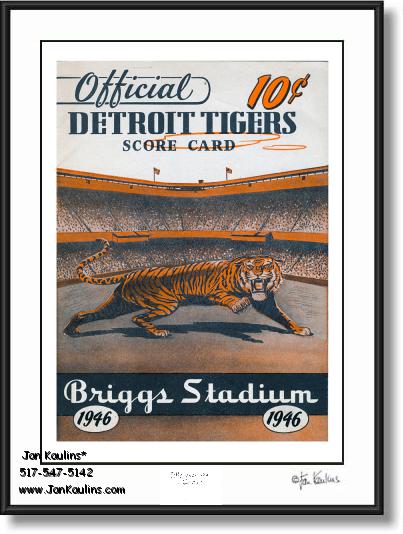 
BRIGGS STADIUM 1946 Official Score Card Cover photo picture print for sale. This is a BRIGGS STADIUM DETROIT fine art photo print made from a professionally restored Original 1946 BRIGGS STADIUM Official Scorebook Program Cover for sale. The vintage art of this cover makes a wonderful and historic image for fans of The Detroit Tigers. Originally the baseball park located at Michigan and Trumbull Avenue in downtown Detroit began its long historic run as Navin Field in 1912 to 1937. In 1938 ownership changed hands and it was named BRIGGS STADIUM. In 1961 the name changed to Detroit Tiger Stadium. The Last Game at Detroit Tiger Stadium was played on Sept. 27, 1999. PLEASE NOTE: The name, phone number and web address shown on this print DO NOT APPEAR ON THE PHOTO THAT YOU PURCHASE