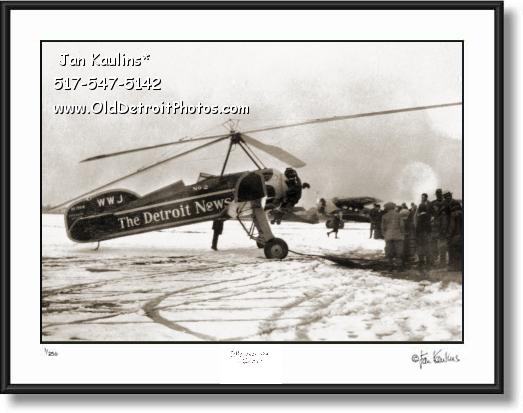 
Detroit News Pitcairn PCA-2 Autogyro 1931 photo picture print for sale. In 1931, The Detroit News made history when it bought a PCA-2 for use as a news aircraft due to its ability to fly well at low altitude, land and take off from restricted spaces, and semi-hover for better camera shots. In May 1933, Scripps donated the autogyro to the Henry Ford Museum in Dearborn, Michigan. This very rare previously unpublished photo from a private collection was taken in 1931 in Dearborn. The 'original' photo is quite small but has very nice detail for an image of that size.

The Pitcairn PCA-2 was an autogyro developed in the United States in the early 1930s.Harold F. Pitcairn's first autogyro design to sell in quantity. It had a conventional design for its day  an airplane-like fuselage with two open cockpits in tandem, and an engine mounted tractor-fashion in the nose. The lift by the four-blade main rotor was augmented by stubby, low-set monoplane wings that also carried the control surfaces. The wingtips featured considerable dihedral to act as winglets for added stability.The PCA-2 Autogyro, developed in the very early 1930's, was the first rotary-wing aircraft to achieve type certification in the United States and was used in a number of high-profile activities including a landing on the White House lawn and the first flight across the United States in a rotorcraft. This latter feat was attempted by Amelia Earhart, flying for the Beech-Nut food company, but was actually accomplished by John M. Miller who completed his flight nine days before Earhart on 28 May 1931, in his PCA-2 named Missing Link."

THESE BLACK AND WHITE DETROIT PHOTO ART PICTURE PRINTS FOR SALE ARE HIGH QUALITY FINE ART REPRODUCTIONS MADE FROM PROFESSIONALLY RESTORED ORIGINAL OLD VINTAGE HISTORICAL DETROIT PHOTOGRAPHS AND NEGATIVES DATING FROM EARLY 1900 TO ABOUT 1960. THE RARE OLD DETROIT ORIGINAL PHOTOS AND BLACK AND WHITE NEGATIVES USED FOR THESE VINTAGE HISTORICAL DETROIT PHOTO PRINTS HAVE BEEN OBTAINED FROM HISTORICAL SOCIETIES, NATIONAL ARCHIVES, THE LIBRARY OF CONGRESS AND NUMEROUS PRIVATE COLLECTIONS. IT HAS TAKEN MANY YEARS TO PUT THESE OFFERINGS TOGETHER ON THIS WEBSITE. MANY OF THESE PHOTOS ORIGINALLY CAME FROM OLD DEFUNCT NEWSPAPER AND MAGAZINE ARCHIVES, WHERE THEY WERE USED ONCE FOR A STORY AND THEN USUALLY JUST THIS ONE ORIGINAL PRINT WAS MADE AND KEPT FOR THEIR ARCHIVES. HENCE, THESE HISTORICAL IMAGES WERE NOT ORIGINALLY MADE TO BE FOR SALE, BUT WERE TO BE USED AS PHOTOS TO GO WITH NEWS STORIES, THUS, MAKING THESE IMAGES EXTREMELY RARE. VERY FEW OF THESE IMAGES HAVE EVER BEEN OFFERED FOR SALE TO THE PUBLIC UNTIL NOW.

THE ORIGINAL OLD DETROIT BLACK AND WHITE PHOTOGRAPHS HAVE DIGITALLY BEEN RE-MASTERED AND ALL MAJOR FLAWS, SUCH AS TEARS, SCRATCHES, MISSING PIECES, FOLDS, INK STAINS, FADING ETC. ON THESE RARE PHOTOS HAVE BEEN PAINSTAKINGLY CORRECTED. HIGH QUALITY PRINTS OF THESE HISTORIC RARE DETROIT BLACK AND WHITE SEPIA TONED PHOTOS ARE NOW OFFERED, FOR THE FIRST TIME, ON THIS WEBSITE WWW.OldDetroitPhotos.COM . THESE BEAUTIFULLY SEPIA TONED PHOTOGRAPHIC FINE ART PRINTS ARE NOW OFFERED IN A LIMITED EDITION. THEY ARE READY FOR DISPLAY IN YOUR HOME OR OFFICE. HERE IS YOUR CHANCE TO OWN AND ENJOY SOME VERY SPECIAL AND UNIQUE DETROIT PHOTOGRAPHIC HISTORY.

Be sure to see all of the SEVERAL HUNDRED fine art Historical Detroit Photos for sale at the numerous Galleries on this site: www.OldDetroitPhotos.com