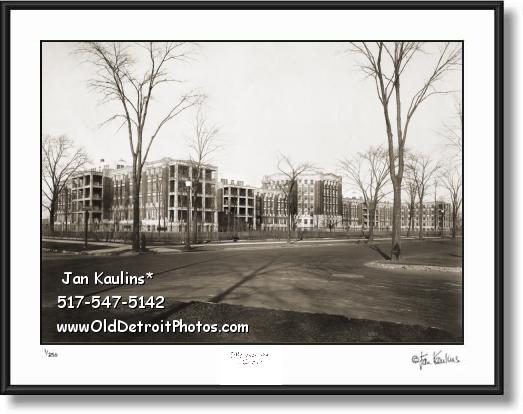 "In 1909, responding to the lack of hospital beds in the city, Dr. William Metcalf organized the Detroit General Hospital Association. The Association included a number of prominent Detroit citizens, among whom was Henry Ford. The Association used donations from its members to purchase a site at Grand Boulevard and Hamilton, and to hire architect William Stratton to design the hospital. Construction on the original seven buildings began in 1912, but the Association soon realized that its $600,000 budget was far too small to complete the hospital. However, in 1914, Henry Ford offered to complete the project and pay off the original donors, in exchange for complete control. The Association accepted, and construction continued. In 1917, it was determined that more space was needed for the hospital, and Ford Motor Company architect Albert Wood was hired to design a new hospital. Contractor Albert A. Albrecht was hired to construct the new hospital, but World War I intervened before construction was complete. In 1918, Ford loaned the semi-completed building to the US government, and it was used as U.S. Army General Hospital Number 36 until late 1919. Construction was completed after the war, in 1921. In 1923, under the direction of doctor Thomas J. Heldt, Henry Ford Hospital became one of the first American general hospitals to establish a psychiatric unit." This is a wonderful quite rare photo from that early era of HENRY FORD HOSPITAL.

THESE BLACK AND WHITE DETROIT PHOTO ART PRINTS ARE VERY HIGH QUALITY PROFESSIONALLY RESTORED REPRODUCTIONS OF ORIGINAL OLD VINTAGE HISTORICAL DETROIT PHOTOGRAPHIC PRINTS OR NEGATIVES. THESE SEPIA TONED DETROIT BLACK AND WHITE PHOTOS ARE OFFERED FOR SALE HERE FOR THE VERY FIRST TIME. THEY HAVE BEEN MADE FROM ORIGINAL NEGATIVES OR ORIGINAL FIRST GENERATION PRINTS, MANY OF THEM ARE 50 YEARS OLD AND SOME DATE TO THE EARLY 1920's AND 1930's. THE RARE OLD DETROIT ORIGINAL PHOTOS AND BLACK AND WHITE NEGATIVES USED FOR THESE PRINTS HAVE BEEN OBTAINED FROM HISTORICAL SOCIETIES, NATIONAL ARCHIVES, THE LIBRARY OF CONGRESS AND NUMEROUS PRIVATE COLLECTIONS. IT HAS TAKEN SEVERAL YEARS TO PUT THESE OFFERINGS TOGETHER ON THIS WEBSITE. MANY OF THESE PHOTOS ORIGINALLY CAME FROM OLD DEFUNCT NEWSPAPER AND MAGAZINE ARCHIVES, WHERE THEY WERE USED ONCE FOR A STORY AND THEN USUALLY JUST THIS ONE ORIGINAL PRINT WAS MADE AND KEPT FOR THEIR ARCHIVES. HENCE, THESE HISTORICAL IMAGES WERE NOT ORIGINALLY MADE TO BE FOR SALE, BUT WERE TO BE USED AS IMAGES FOR NEWS STORIES AS THEY UNFOLDED--MAKING THESE IMAGES EXTREMELY RARE HAVING SURVIVED SO MANY YEARS. VERY FEW OF THESE IMAGES HAVE EVER BEEN OFFERED FOR SALE TO THE PUBLIC UNTIL NOW.