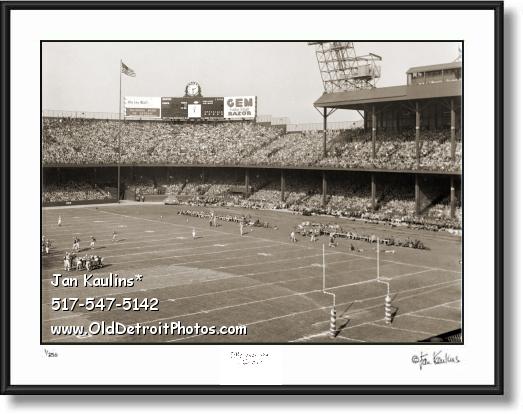 
DETROIT LIONS BRIGGS STADIUM photo picture print photograph for sale. This BRIGGS STADIUM DETROIT LIONS TIGER STADIUM photo picture print for sale is made from an Original black and white 1950's negative/photograph that has been professionally restored and is offered in a numbered Limited Edition print. Before the Pontiac Silverdome was built the NFL DETROIT LIONS shared Briggs Stadium (Detroit Tiger Stadium) with the Detroit Tigers for their games. This is a very unique good quality amateur 1950's photo of The Detroit Lions vs. The San Francisco 49er's (as is shown on the scoreboard at top of this historic Detroit Lions at Briggs Stadium photograph) showing the players on the field and the crowded grandstands filled with Detroit sports fans. It was photographed with 35mm black and white film so the detail, though quite good, is slightly grainey (just mentioned for the sake of accuracy) as this would look great in 11x14 photos offered on this website. Photographs of The Detroit Lions playing at Briggs Stadium are quite uncommon. This is a fine quite rare DETROIT LIONS BRIGGS STADIUM photo print for sale showing the playing field, the goal posts, and the crowds in the stands of the now demolished historic Detroit Tiger Stadium.