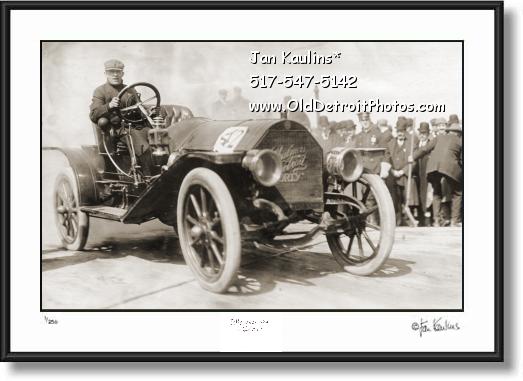 
CHALMER-DETROIT RACE CAR 1908 photo picture print photograph for sale. This is a rare CHALMERS-DETROIT racing car picture photo for sale made from a professionally restored Original black and white 1908 snapshot. It shows the driver at the helm of #42 racer as the crowds (with derby hats) and policemen look on. Because the Original photo snapshot from which these sepia tone restored prints will be made was small and had seen lots of handling over the 120 years or so since it was printed, even with the restoration there will be some minor flaws showing on the finished prints---but the image is so rare of such an early racer, which has never been previously published before, that these blemishes can easily be overlooked. It is a great image of the earliest era of automobile racing from one of the earliest automobile manufacturers in Detroit.

Chalmers Motor Car Company was a United States based automobile company located in Detroit, Michigan. It was named after Hugh Chalmers of the National Cash Register Company. The brand is owned by Chrysler.The Chalmers Company was formed when Hugh Chalmers bought out the interests of ER Thomas in the Thomas-Detroit company in 1908, and renamed the company Chalmers-Detroit.The name was changed to Chalmers in 1911.Chalmers flourished in the 1910s and then faltered in the 1920s post-World War I recession. It merged with the Maxwell Automobile Company, forerunner of Chrysler, in 1922, and ended all production in late 1923. This is a very rare historic photo from 1909 as the Chalmers-Detroit insignia on the front of the radiator, as seen in this CHALMERS-DETROIT photo print for sale, was only used during 1909 and 1910---in between name changes and ownerships.


THESE BLACK AND WHITE DETROIT PHOTO ART PRINTS ARE VERY HIGH QUALITY PROFESSIONALLY RESTORED ARTISTIC REPRODUCTIONS OF ORIGINAL OLD VINTAGE HISTORICAL DETROIT PHOTOGRAPHIC PRINTS. THESE SEPIA TONED BLACK AND WHITE DETROIT PHOTO PICTURE PRINTS ARE OFFERED FOR SALE HERE FOR THE VERY FIRST TIME. THEY HAVE BEEN MADE FROM ORIGINAL NEGATIVES OR ORIGINAL FIRST GENERATION PRINTS, MANY OF THEM ARE 50 YEARS OLD AND SOME DATE TO THE EARLY 1920's AND 1930's. THE RARE OLD DETROIT ORIGINAL PHOTOS AND BLACK AND WHITE NEGATIVES USED FOR THESE PRINTS HAVE BEEN OBTAINED FROM HISTORICAL SOCIETIES, NATIONAL ARCHIVES, THE LIBRARY OF CONGRESS AND NUMEROUS PRIVATE COLLECTIONS. IT HAS TAKEN SEVERAL YEARS TO PUT THESE OFFERINGS TOGETHER ON THIS WEBSITE. MANY OF THESE PHOTOS ORIGINALLY CAME FROM OLD DEFUNCT NEWSPAPER AND MAGAZINE ARCHIVES, WHERE THEY WERE USED ONCE FOR A STORY AND THEN USUALLY JUST THIS ONE ORIGINAL PRINT WAS MADE AND KEPT FOR THEIR ARCHIVES. HENCE, THESE HISTORICAL IMAGES WERE NOT ORIGINALLY MADE TO BE FOR SALE, BUT WERE TO BE USED AS IMAGES FOR NEWS STORIES AS THEY UNFOLDED--MAKING THESE IMAGES EXTREMELY RARE HAVING SURVIVED SO MANY YEARS. VERY FEW OF THESE IMAGES HAVE EVER BEEN OFFERED FOR SALE TO THE PUBLIC UNTIL NOW.

THE ORIGINAL OLD DETROIT BLACK AND WHITE PHOTOGRAPHS HAVE DIGITALLY BEEN RE-MASTERED AND ALL MAJOR FLAWS, SUCH AS TEARS, SCRATCHES, MISSING PIECES, FOLDS, INK STAINS ETC. ON THESE RARE PHOTOS HAVE BEEN PAINSTAKINGLY REMOVED AND CORRECTED AND HIGH QUALITY PRINTS OF THESE HISTORIC RARE DETROIT BLACK AND WHITE SEPIA TONED PHOTOS ARE NOW OFFERED, FOR THE FIRST TIME, ON THIS WEBSITE WWW.OldDetroitPhotos.COM . THESE PHOTOS HAVE BEEN BEAUTIFUL RESTORED AND ARTISTICALLY SEPIA TONED AND OFFERED IN A LIMITED EDITION OF INDIVIDUALLY PRINTED PHOTO PRINTS. THEY ARE READY FOR DISPLAY IN YOUR HOME OR OFFICE. HERE IS YOUR CHANCE TO OWN AND ENJOY SOME VERY SPECIAL AND UNIQUE DETROIT HISTORY.