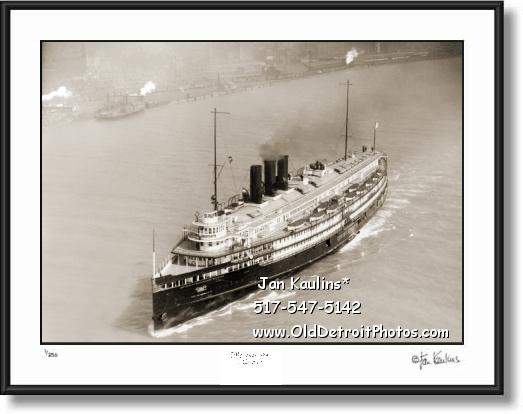 
CITY OF DETROIT III GREAT LAKES STEAMER photo picture print photograph photography for sale. This sepia toned CITY OF DETROIT III Great Lakes Steamship photo print picture for sale is made from a professionally restored original ca. 1928 negative/photo. It is a wonderful full length portrait of this historic vessel on The Detroit River.

The City of Detroit III cost $1,500,000 to build ($37.4 million in 2012 dollars) and was ornately furnished. Forty percent of the ship's width was situated over the wheels, allowing room for many amenities like salons, a palm court and a winery to be built into the ship. One of the rooms was an opulent smoking room called the "Gothic Room", named for its Gothic architecture design. It was built from English oak and included several stained glass windows.
The City of Detroit III was taken out service in 1950 when the D&C went out of business. It was sold for scrap in 1956 and was dismantled.

THE ORIGINAL OLD DETROIT BLACK AND WHITE PHOTOGRAPHS HAVE BEEN PROFESSIONALLY RESTORED DIGITALLY BEEN RE-MASTERED AND ALL MAJOR FLAWS, SUCH AS TEARS, SRACTCHES, MISSING PIECES, FOLDS, INK STAINS ETC. ON THESE RARE PHOTOS HAVE BEEN PAINSTAKINGLY REMOVED AND CORRECTED AND HIGH QUALITY PRINTS OF THESE HISTORIC RARE DETROIT BLACK AND WHITE SEPIA TONED PHOTOS ARE NOW OFFERED, FOR THE FIRST TIME, ON THIS WEBSITE WWW.OldDetroitPhotos.COM . THESE OLD DETROIT PHOTOS FOR SALE HAVE BEEN BEAUTIFUL RESTORED AND ARTISTICALLY SEPIA TONED AND OFFERED IN A LIMITED EDITION OF INDIVIDUALLY PRINTED PHOTO PRINTS. THEY ARE READY FOR DISPLAY IN YOUR HOME OR OFFICE. HERE IS YOUR CHANCE TO OWN AND ENJOY SOME VERY SPECIAL AND UNIQUE DETROIT PHOTOGRAPHIC HISTORY.