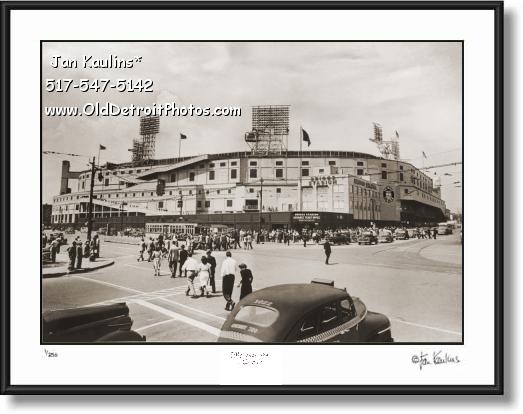 The 1930s gave Tiger Stadium its look that it retained for 70 years. In 1935, Navin Field was renamed Briggs Stadium after owner Walter O. Briggs. A series of expansions began prior to the 1936 season. The single deck pavilion that extended down the first base line and around into right field was double decked. Before the addition could be built in right field, a problem had to be solved. Trumbull Avenue was located behind the right field fence therefore the grandstands could not be expanded out. To solve the problem, the right field line was shortened to 325 feet and the upper deck extended over the lower deck and over the playing field 10 feet. Construction was completed by April 1937 and Briggs Stadium could seat 36,000 fans. After the 1937 season an additional expansion was completed at Briggs Stadium. The single deck pavilion that extended down the third base line and around into left field was double decked. A gap between the double decks in right and left field was filled with two decks of bleachers with the scoreboard placed on top. With this expansion, Briggs Stadium was now enclosed and had a capacity of 54,500, making it one of baseballs largest stadiums. Dimensions were 340 ft. (left), 440 ft. (center), and 325 ft. (right).

This is a wonderful historic Briggs Stadium fine-art photo print ready for display in the your home or office. Be sure to see the other Briggs Stadium photos on this website.

THE ORIGINAL OLD DETROIT BLACK AND WHITE PHOTOGRAPHS HAVE DIGITALLY BEEN RE-MASTERED AND ALL MAJOR FLAWS, SUCH AS TEARS, SCRATCHES, MISSING PIECES, FOLDS, INK STAINS ETC. ON THESE RARE PHOTOS HAVE BEEN PAINSTAKINGLY REMOVED AND CORRECTED AND HIGH QUALITY PRINTS OF THESE HISTORIC RARE DETROIT BLACK AND WHITE SEPIA TONED PHOTOS ARE NOW OFFERED, FOR THE FIRST TIME, ON THIS WEBSITE WWW.OldDetroitPhotos.COM . THESE PHOTOS HAVE BEEN BEAUTIFUL RESTORED AND ARTISTICALLY SEPIA TONED AND OFFERED IN A LIMITED EDITION OF INDIVIDUALLY PRINTED PHOTO PRINTS. THEY ARE READY FOR DISPLAY IN YOUR HOME OR OFFICE. HERE IS YOUR CHANCE TO OWN AND ENJOY SOME VERY SPECIAL AND UNIQUE DETROIT PHOTOGRAPHIC HISTORY.