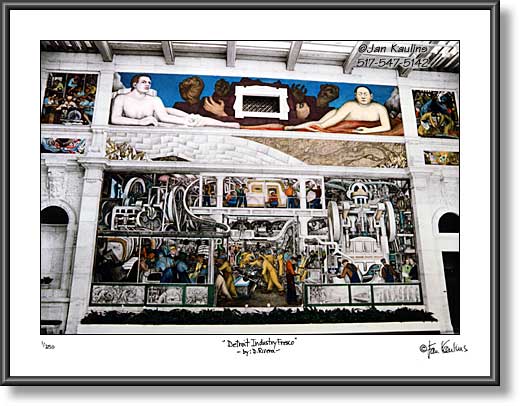 
DETROIT INDUSTRY FRESCO BY DIEGO RIVERA picture photo art - Detroit, Michigan DIA. Detroit Industry Diego Rivera mural DIA art picture photo print for sale: This Detroit Art Gallery photo of the Diego Rivera fresco is a color picture of a hand-colored black and white photograph of the South wall fresco created for The Detroit Institute of Art during 1932 by Mexican artist Diego Rivera. In this hand-colored photograph we see Diego Rivera celebrate the automobile and technology in the new Industrial Age of Detroit. Most of Diego Rivera's inspiration for this series commissioned by Edsel Ford came from Rivera's visits to the Ford River Rouge Plant Complex in Dearborn Michigan, on the edge of Detroit (See photos of The Ford Rouge Plant in the Landmarks Galleries on this website). This photograph of Diego Rivera Detroit Industry fresco, a picture of the South wall, inside The Detroit Institute of Arts, is picturing automotive workers on the assembly line at The Ford River Rouge Plant. This Detroit photo print captures one of the most dramatic and beautiful works of art in The City of Detroit.