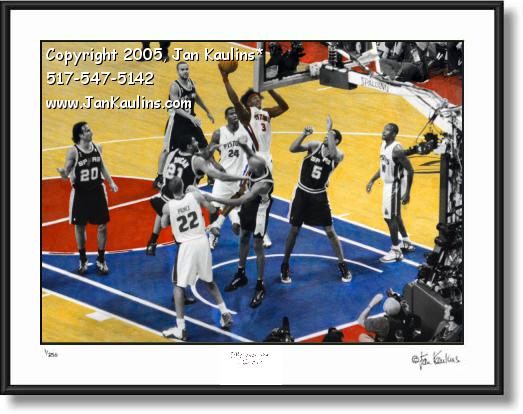 
BEN WALLACE DETROIT PISTONS NBA FINALS picture photo photograph art PRINT for sale. DETROIT PISTONS BEN WALLACE photograph picture photo poster of The 2005 NBA Finals game at The Palace of Auburn Hills. This exceptional color Detroit Pistons photo is made from an original black and white photograph that has been hand-colored by nationally recognized award winning artist/photographer Jan Kaulins. This original unique action photo was taken during the last game in Detroit for Coach Larry Brown, Game five of The 2005 NBA Finals where The Detroit Pistons squared off against The San Antonio Spurs in an attempt to keep the Larry O'brien Trophy that they won for being 2004 NBA Finals Champions last year.

In this dramatic Detroit Pistons NBA Finals photo photograph we see Big Ben Wallace, going up high in the air, ready to slam dunk another of his trademark shots, as several San Antonio Spurs look on helplessly. The 2005 NBA Finals went back and forth in 6 exciting games and on to Game 7 where The Detroit Pistons eventually had to give up their Championship reign, for one year anyway--There's always 2006 to look forward to, as almost all of the key players will be back again. They had a great season and provided their many fans with many memorable moments of great sportsmanship, excitement, talent and shows of heart that make this team the pride of Detroit. To order this photo click on the appropriate link below.