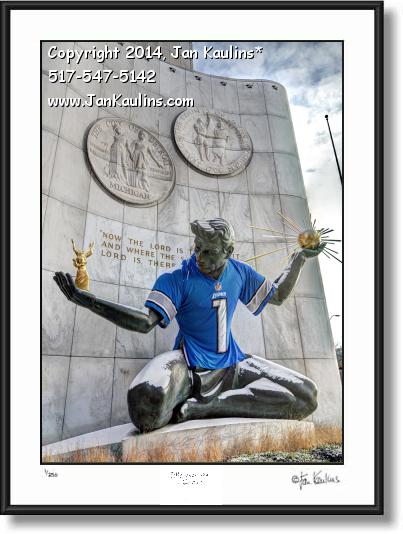 
DETROIT LIONS JERSEY SPIRIT OF DETROIT photo picture art poster print photography for sale. SPIRIT OF DETROIT LIONS JERSEY photo print art photographs for sale of this now historic image of THE SPIRIT OF DETROIT wearing a DETROIT LIONS JERSEY during the NFL Playoffs in 2014. It was the first time since 1991 that The Detroit Lions, after a great season with their new Coach and team finished the season with an impressive 11-5-0 record, and made it to the NFL Playoffs. Because of a very controversial 'reversed miscall' by the referees the Lions were gypped out of a potential victory in their first round against the Cowboys ending a great season. Even President Obama weighed in on the call, as quoted here in the Detroit Free Press: " Obama said he watched the game and told the newspaper that he couldn't "remember a circumstance in which a good call by one of the refs is argued about by an opposing player of the other team with his helmet off on the field, which in and of itself is supposed to be a penalty. The call is announced and then reversed without explanation. I haven't seen that before. So I will leave it up to the experts to make the judgment as to why that happened, but I can tell you, if I was a Lions fan, I'd be pretty aggravated."

The number 1 on the DETROIT LIONS JERSEY signifys how the fans feel about their Lions. Go Lions!

This artistic SPIRIT OF DETROIT LIONS JERSEY photo picture print for sale is made from numerous 'bracketed' photogaphic exposures by artist/photographer Jan Kaulins. It add another image to his series of all the jerseys placed on The Spirit of Detroit (seen on this website.)