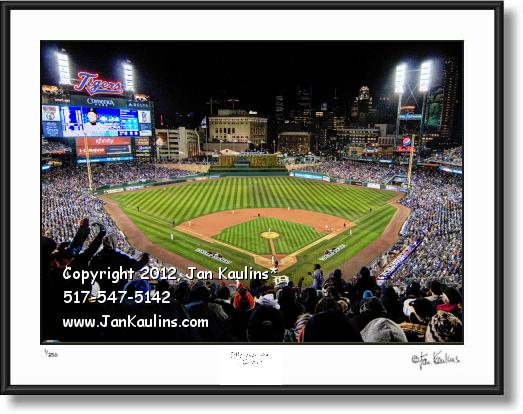 
DETROIT WORLD SERIES DETROIT COMERICA PARK 2012 Detroit Tigers WORLD SERIES 2012 photos photo picture art photograph print photography art for sale: This historic 2012 Detroit Tigers World Series Comerica Park photo picture print was taken in Detroit Comerica Park towards the end of game #4 of the 2012 WORLD SERIES where the Detroit Tigers were trying hard to win their first game in this World Series matchup with the San Francisco Giants at the historic matchup between the American League Pennant Champion Detroit Tigers vs. The National League Pennant Champion San Francisco Giants. The Detroit Tigers easily won the ALCS Championship soundly defeating the Oakland A's and then trounching the New York Yankees. A week off between their American League victory may have had some effect on Detroit. The pitching was excellent for many of the pitching roster but the bats were weak. Though the Tigers were defeated in this Series, they had a good year just to make it to THE 2012 WORLD SERIES. All the Detroit fans are proud of their Tigers and look forward to another good year of Tiger Baseball at Comerica Park. This is an excellent professional multiple exposure wide angle photo with Triple Crown Winner #24 Miguel Cabrera at the plate. In the background can be the city lights on the Detroit skyline--a very rich and colorful artistic as well as historic rare image. This photograph was created by taking nine bracketed digital exposures and then processing them together to create this image with the best parts of each of the nine exposures.