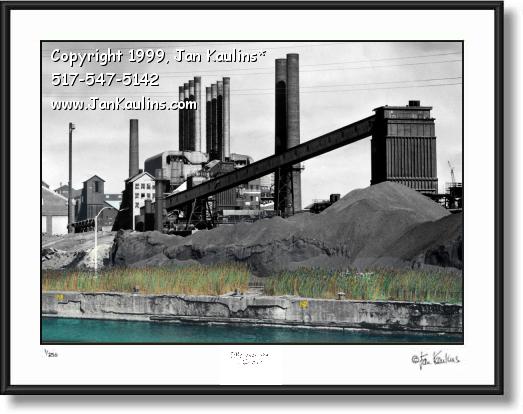 
FORD RIVER ROUGE PLANT photo picture print for sale. Dearborn Ford Rouge Power Plant photo picture art print photography for sale. Detroit Photo Art Gallery hand-colored black and white Ford Rouge Plant photo for sale. TITLE: FORD ROUGE PLANT COAL STACKS. In the late 1920's and early 1930's The Ford Rouge Plant became the largest industrial complex in the world, as well as the most advance, architecturally and technically. Because Henry Ford was determined to beindepenedent of suplliers, he developed the Rouge into an almost self-sufficient and self-contained industrial city. Construction began in 1917 and ten years later the Rouge Plant facility contained 93 structure, 90 miles of railroad tracks, 27 miles of converyors, 53,000 machine tolls and 75,000 employees. The complex was designed by noted Detroit architect Albert Kahn. This Dearborn Ford Rouge Plant picture photo shows the original Ford Rouge Power Plant with piles of coal behind it which will be used to stoke it's giant furnaces and the waterway chanel in front of it, as seen from The Dix Street bridge, that will transport the raw and finished materials from The Ford Rouge Complex. This Ford River Rouge Plant photo shows The Ford Rouge Plant Power Plant, which since this photo, has seen all of the giant smokestacks removed and much of the brick structure of historic Ford Rouge Powerhouse Plant torn down. Ford Rouge Plant Factory Tour tickets are available through Henry Ford Museum in Dearborn. (DETROIT PHOTO GALLERY AND DETROIT ART GALLERY)