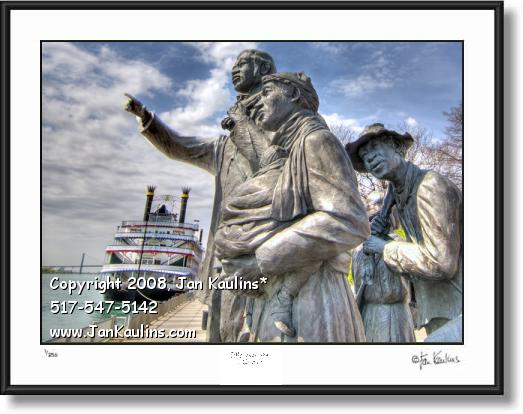 
UNDERGROUND RAILROAD MEMORIAL DETROIT photo art print photograph picture for sale UNDERGROUND RAILROAD MEMORIAL Detroit photo art print fine-art photography Detroit multiple exposure photo art for sale. This is a powerful MULTIPLE EXPOSURE photographic portrait of the Underground Railroad Memorial in Detroit, created by noted artist Ed Dwight, which sits on the edge of the Detroit River in downtown Detroit Michigan. This photograph was taken looking west. In the distance can be seen the Ambassador Bridge which connects Canada and United States. In the middle ground docked on the Detroit River is the Riverboat Princess. The magnificent and moving sculpture is in the foreground of this fine-art photograph by artist/photographer Mr. Jan Kaulins.

"This memorial is placed in one of the narrowest places in the Detroit river. Detroit was one of the largest gateways out of the country to free slaves to Windsor, Ontario, Canada. These rough waters in the dark of night was the route traveled to freedom. Many of the churches were hideouts for the slaves by day and until arrangements were made for the border crossing.

The memorial has many granite slabs engraved with facts about this gateway to freedom for enslaved people. One of these engravings shows many of the routes slaves had to take to get to Detroit. Another that shows a map of the Underground Railroad installments here in the city.

Until Emancipation, Detroit and the Detroit River community served as a gateway to freedom for thousands of African American people escaping enslavement. Detroit was one of the largest terminals of the Underground Railroad, a network of abolitionists aiding enslaved people seeking freedom. Detroits Underground Railroad code name was Midnight. At first, Michigan was a destination for freedom seekers, but Canada became a safer sanctuary after slavery was abolished there in 1834. With passage of the Fugitive Slave Act in 1850, many runaways left their homes in Detroit and crossed the river to Canada to remain free. Some returned after Emancipation in 1863.
The successful operation of Detroits Underground Railroad was due to the effort and cooperation of diverse groups of people, including people of African descent, Whites, and North American Indians. This legacy of freedom is a vital part of Detroit and its history."


This is an original High Dynamic Range (HDR) color photograph created by nationally recognized artist/photographer Jan Kaulins. It is one of the newest artistic images in his most recent series of photographs. Each photograph has been created from nine separate photographic digital exposures and then layered together into one photographic image. It is then tone-mapped where individual areas of the photo, as well as contrast, saturation and other qualities of the image can be artistically manipulated to bring out the artistic effects that make these photos so visually unique. Some of the photos in this series are even further enhanced for artistic effect giving them an almost painterly or graphic silkscreened look. They do not look like your grandmothers traditional photos. These photos are however not hand-colored, like Jans other photographic series shown on this website.