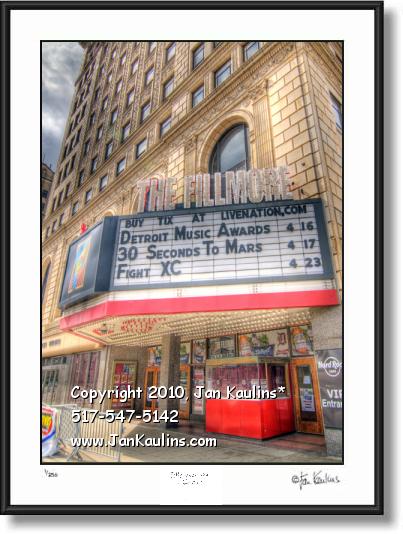 
FILLMORE THEATRE DETROIT photo art print multiple exposure of The Fillmore Theatre HDR Detroit photograph for sale. This is a fine HDR Detroit portrait of one of the favorite music venues in the City of Detroit. This building and theatre have been used for entertainment for many generations having started out as The Palms Theatre. Later it became the State Theatre and The Fillmore Theatre is the most recent incarnation. It is located on Woodward Ave. in downton Detroit near the Fox Theatre.

These are original High Dynamic Range (HDR) color photographs created by nationally recognized award winning artist/photographer Jan Kaulins. They are the newest artistic images in his most recent series of photographs. Each photograph has been created from NINE SEPARATE BRACKETED DIGITAL EXPOSURES and then layered together into one photographic image. It is then tone-mapped where individual areas of the photo, as well as contrast, saturation and other qualities of the image can be artistically manipulated to bring out the artistic effects that make these photos so visually unique. Some of the photos in this series are even further digitally enhanced for artistic effect giving them an almost painterly or graphic silkscreened look. They do not look like your grandmothers traditional photos. These photos are however not hand-colored, like Jans other photographic series shown on this website.

This is a relatively new photography technique which uses the blending of NINE BRACKETED DIGITAL EXPOSURES to capture and emulate the way that light levels in the real world vary over an enormous tonal range, from the brightest area of sunlight to the darkest area in the shadows. All of these varying degrees of light cannot be exposed properly and captured in a single photograph---hence the necessity of layering and combining of the multiple over and under exposures to allow the viewer to see all of the existing areas of light at one time in one photo. The enhanced saturation and color of the multiple images also is a partial result of this very unique photographic process and can be quite stunning and dramatic. Sometimes these artistic Jan Kaulins photos seem to almost blur the sense of reality and illusion. CLICK ON THE LINK BELOW TO SEE PRICES, SIZES AVAILABLE AND ORDER INFORMATION.