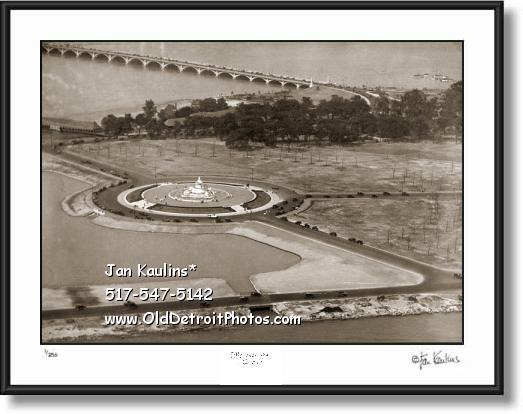 "The James Scott Memorial Fountain in Detroit, Michigan, USA, was designed by architect Cass Gilbert and sculptor Herbert Adams. Located in Belle Isle Park, the fountain was completed in 1925 at a cost of $500,000. The lower bowl has a diameter of 510 ft and the central spray reaches 125 ft. The fountain honors the controversial James Scott, who left $200,000 to the City of Detroit for a fountain in tribute to himself. Scott was left a sizable fortune by his father who invested in Detroit real estate. According to contemporaries, Scott gambled and told off-color stories. He was described by twentieth-century author W. Hawkins Ferry as vindictive and a misanthrope who attempted to intimidate his business competitors and when this was unsuccessful, he filed suit. Perhaps for these reasons, Scott died in 1910 with no heirs or collegues and he bequeathed his estate to the City of Detroit with the condition that the fountain include a life-sized statue of him. Some accounts state that the will required that the statue be at the fountain's pinnacle.
Several community and religious leaders spoke against accepting the bequest saying that a person with Scott's reputation should not be immortalized in the city. Mayor Philip Breitmeyer and City Council President David Heineman urged accepting the gift saying that the city shouldn't insult any of its citizens by refusing such a generous offer. While the debate raged, Scott's fortune continued to grow and by the time construction commenced it topped $1 million. The final design placed Scott's statue in an inconspicous spot behind the fountain."