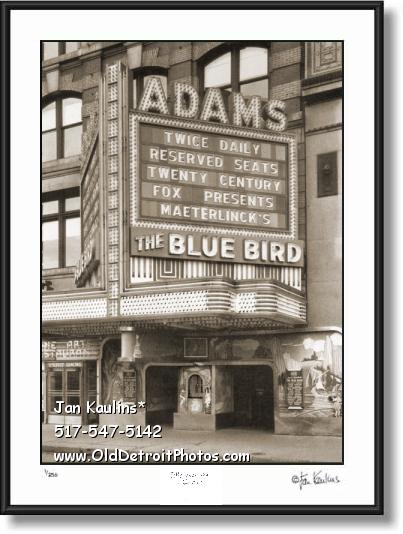 
VINTAGE OLD DETROIT ADAMS MOVIE THEATER 1940 Detroi black and white photo picture print for sale. This sepia toned VINTAGE DETROIT ADAMS MOVIE THEATER 1940 photo picture print for sale was made from an original vintage 1940's black and white Adam's Theatre photo and restored to create this excellent historic image seen here. This sepia toned OLD DETROIT ADAMS MOVIE THEATER photo was made from an original vintage black and white restored photograph of this very early downtown Detroit legit theater and later motion picture film theater. THE ADAMS THEATER was designed by noted architect C. Howard Crane and opened in 1917. It was located at 44 West Adams in Grand Circus Park in downtown Detroit. The theater actually occupied two buildings separated by an alley: the lobby gradually sloped downward beneath an alley to a stairway which let to the main auditorium. Like many of the early cinemas, the Adams Theater screen was located at the rear of the stage, making for uncomfortable viewing by patrons seated in the front rows. Silent film director D.W. Griffith and actors Dorothy and Lillian Gish made personal appearance here in 1922 to promote a new film. Though when The Adams opened it was with a stage show, it soon was fitted with motion picture equipment. This historic photo of it is from 1929, about two years after it went from silent films to 'talkies'. It went through several incarnations and remodels until it was finally closed for good in 1988--one of the last surviving downtown Detroit theaters. This is an excellent vintage 1940 portrait of this landmark downtown Detroit Adams Theatre in its very early days of operation. On the large billboard marquee we can see 'The Bluebird' motion picture being featured. On the front of the Adams Theatre at street level you can see the beautiful artwork scenery painted on the facade as you approach this theatre.