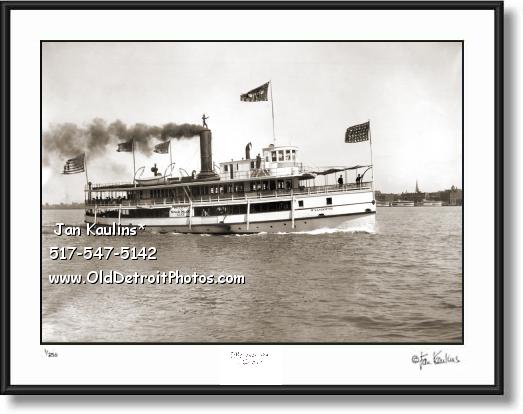 
WYANDOTTE STEAMER photo picture print for sale of old Wyandotte MI vintage S.S. WYANDOTTE STEAMSHIP photograph pictures prints photography for sale. This WYANDOTTE STEAMSHIP photo print for sale is made from the original vintage (ca. 1910) original black and white negative/photo. This is a very rare image of The S.S. WYANDOTTE on The Detroit River around 1910. On the bow of this historic vessel can be read 'WYANDOTTE'. In the distance in the background, docked along the Riverfront of Detroit can be seen the Bob-Lo Boats. Also seen in this rare WYANDOTTE STEAMSHIP photo picture print we can see the silhoutte of a large statue of CHIEF WYANDOTTE with bow and arrow in hand, atop the top of the smoking chimney! The large sign in the mid section reads "Detroit & Sugar Island Line". Sugar Island is a small island in the Detroit River between Grosse Ile and Boblo Island.

Sugar Island is part of Grosse Ile Township, Wayne County, Michigan, USA, and lies about 0.5 miles west of the border with Canada. Currently the island is uninhabited and was recently converted to wildlife refuge by the US Fish and Wildlife service. The majority of the island is wooded and it is known for its white sandy beaches and easy access by boat.
In the early part of the 20th century (c. 1900-1940), Sugar Island was the site of a resort park and large dance pavilion. Access to the island was by the steam ferry WYANDOTTE and also the SS Tashmoo. Tashmoo met her fate on the night of June 18, 1936 while departing Sugar Island she struck a rock. She was able to land her passengers in Amherstburg, Ontario before sinking.


When Detroit had the reputation of being the greatest excursion port in the country, except New York City, this Steamer Wyandotte, of the Ashley & Dustin Line, covered the Sugar Island route, which included stopping at WYANDOTTE Michigan. That was around 1910-1915, before the motor car played havoc with the steamboat excursions. The S.S. WYANDOTTE, seen in this historic photo, went to the Atlantic coast when its days on the Sugar Island Detroit River route was over. This is a very rare image of it during these glory years of the Steamboats on The Detroit River.