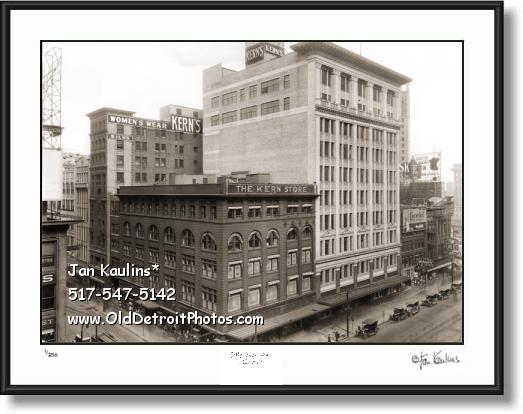 
KERN'S DEPARTMENT STORE Detroit 1920 photo picture print photograph for sale. This very rare old DETROIT KERN'S DEPARTMENT STORE photo picture print is made from the professionally restored 1920's original negative/photograph. This historic vintage Kern's Department Store Detroit photo is an excellent portrait of this longtime iconic downtown Detroit Landmark on Woodward Avenue. On the streets below we see a row of Model-T's parked on the curb.

"KERN'S DEPARTMENT STORE, or the The Ernst Kern Dry Good Company, was established in Detroit in 1883 by Ernst Kern, who was born in Germany. In 1886, the original store was consumed by fire and was rebuilt at Randolph and Monroe. In 1900, the company purchased a five story building at Woodward and Gratiot to accommodate increasing business. When Ernst Kern died in 1901, his sons Ernst C. and Otto assumed control of the store. After World War I, additional space was once again needed for expansion, and the Kern's department store acquired the adjoining nine-story Weber Building. In 1929, the old structures were demolished and a new store was erected at 1048 Woodward Avenue that was 162 feet high and contained ten floors. In 1957, the family decided to sell Ernst Kern Co., by then Detroit's third-largest department store, to Sattler's Inc. of Buffalo, New York. Following numerous corporate problems and changes in management, the store closed its doors for the final time on December 23, 1959.

The store was demolished in 1966, along with Detroit's old City Hall, and the Paradise Building across the street, as part of Detroit's downtown urban renewal. The site remained an undeveloped park until 1999, when the Campus Martius Park project began. The former site of Kern's is now occupied by the Compuware corporate headquarters. A parking garage for Compuware is on the site formerly occupied by the neighboring Crowley's Department Store. When the Kern's building was demolished, the clock which graced the main entrance was placed into storage. It was reinstalled near its original location in the late 1970s. It was removed and refurbished to allow for construction of the Compuware Building and installed again in 2008 at the corner of Woodward and Gratiot Avenue." This is an excellent and rare image printed as a fine-art photographic print of this historic downtown Detroit business landmark offered only for sale here in The Vintage Detroit Photo Gallery website.