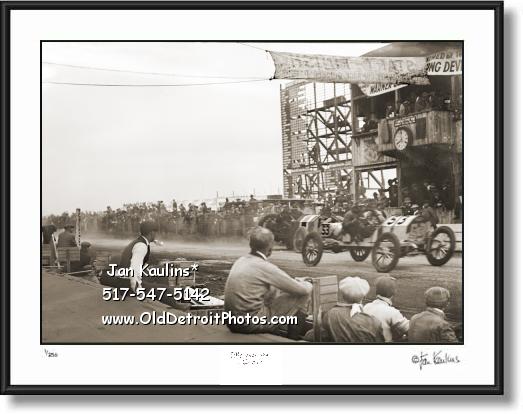 The Abbott-Detroit Company was formed in 1909 and built cars in Detroit until 1916. The Abbott-Detroit was known as an 'assembled' car, meaning it was built using already made components that were currently being offered to automobile manufactures.

Most Abbot-Detroit vehicles were built using Continental four and six cylinder engines, which were considered to be the most durable and reliable automobile engines of the period. To promote their automobile, the company engaged its vehicles in a variety of speed and endurance competitions. The most adventurous publicity stunt was a 100,000 mile trek made by Dr. Charles G. Percival, who drove an Abbott-Detroit touring car around the borders of the United States and from coast to coast three times. Abbott-Detroit also won the stock class in the 1910 Fairmont Park race in Philadelphia and made a successful showing in the 1911 Vanderbilt Cup race shown here in this rare photograph. The Abbott-Detroit was an American luxury automobile manufactured between 1909 and 1919. It was considered powerful and well-designed, and had a Continental engine. Production of the auto began in Detroit, Michigan and was moved to Cleveland, Ohio in 1916 at which time the automobile name was shortened to Abbott.[1] The cars were guaranteed for life by 1913, when electric lighting and starting had been standardized.

THESE BLACK AND WHITE DETROIT PHOTO ART PRINTS ARE VERY HIGH QUALITY REPRODUCTIONS OF ORIGINAL OLD VINTAGE HISTORICAL DETROIT PHOTOGRAPHIC PRINTS. THESE SEPIA TONED BLACK AND WHITE DETROIT PHOTOS ARE OFFERED FOR SALE HERE FOR THE VERY FIRST TIME. THEY HAVE BEEN MADE FROM ORIGINAL NEGATIVES OR ORIGINAL FIRST GENERATION PRINTS, MANY OF THEM ARE 50 YEARS OLD AND SOME DATE TO THE EARLY 1920's AND 1930's. THE RARE OLD DETROIT ORIGINAL PHOTOS AND BLACK AND WHITE NEGATIVES USED FOR THESE PRINTS HAVE BEEN OBTAINED FROM HISTORICAL SOCIETIES, NATIONAL ARCHIVES, THE LIBRARY OF CONGRESS AND NUMEROUS PRIVATE COLLECTIONS. IT HAS TAKEN SEVERAL YEARS TO PUT THESE OFFERINGS TOGETHER ON THIS WEBSITE. MANY OF THESE PHOTOS ORIGINALLY CAME FROM OLD DEFUNCT NEWSPAPER AND MAGAZINE ARCHIVES, WHERE THEY WERE USED ONCE FOR A STORY AND THEN USUALLY JUST THIS ONE ORIGINAL PRINT WAS MADE AND KEPT FOR THEIR ARCHIVES. HENCE, THESE HISTORICAL IMAGES WERE NOT ORIGINALLY MADE TO BE FOR SALE, BUT WERE TO BE USED AS IMAGES FOR NEWS STORIES AS THEY UNFOLDED--MAKING THESE IMAGES EXTREMELY RARE HAVING SURVIVED SO MANY YEARS. VERY FEW OF THESE IMAGES HAVE EVER BEEN OFFERED FOR SALE TO THE PUBLIC UNTIL NOW.